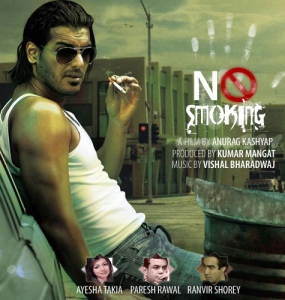 No Smoking: Outstanding script, Exhilarating narration, Metaphorical melodrama, commendable direction and such a masterpiece of the decade!

If you think of 100 years of Hindi film industry you will find that only a few movies were made not just to entertain or give you a message but to make you think beyond your intelligence level. Yes, I used ‘intelligence’; because in the current scenario, the audience is victimized by spoon-feeding storytelling culture. ‘No smoking’ breaks this barrier, gives the audience to float among boxes of puzzles and prompts them to think twice before smoking.

When I heard about this movie I thought it would be another documentary kind of treatment narrated by director Anurag Kashyap, just like his previous movie ‘Black Friday’ and of course, reviews were all confusing. But unexpectedly, Film bound me till the end with certain clues to give the final message. The only thing I had to do was to open my mind at the start and accept the confusing/odd scenario for few minutes so that I could connect the dots, later during the movie. The film is not for the people who just seek for entertainment.

Recently, I was reading few reviews of ‘No Smoking’ which was published in the year of its release and after watching this movie on the recommendation of my colleague, I was thinking of those reviewers who actually bashed the movie. How could they be so rude? If they couldn’t understand the metaphors and plots how they could simply call it ‘Dumb’ without thinking twice? Yes, you heard it right, ‘Dumb’. You can read the statement written by few reviewers.

“Now what was that? Cinema is all about three Es — enlighten, educate and entertain. But NO SMOKING neither educates, nor enlightens. As for entertainment, forget it!” – Taran Adarsh

“Sir Kashyap, your genius is blinding. Thank you for Quitters’ Inc which you have set in Mumbai and Siberia. And if you ask me, at this very point, I don’t want to quit smoking. I want to quit Kashyaping. See a Bhojpuri or a Blogpuri movie. Just don’t do this to me sir, please, don’t. The rest of the world needs your brain. Ulp, I don’t.” – Khalid Mohamed

The last statement was written by one and only Khalid Mohamed who claims to be a good writer and filmmaker as per his filmography. Even, Anurag Kashyap was disappointed by looking at those reviews. In his words:

“Sitting in rome reading the extreme reactions and reviews.. Khalid reviewed me and not the film and from his review all i can say is neither has he read “Quitter’s inc” nor has he seen “cat’s eye”.. he just read the comments on PFC.. and i will say to him is , “Ch**iye tu retire ho ja , tera time khatam.”

“Rajeev masand’s POV is quite fair.. he expected a lot..probably another Black Friday but he is an honest man.. his review was more anger than criticism.. only thing that upset me was him calling it the worst movie of the year..it probably is from his POV but then he should have broken an Ostrich’s egg on camera and i would have bought it.. reviews that the film has got were expected.. everyone involved and who had seen it had warned me about it..but then that’s the price you pay for being arrogant..”

I am not here to criticize those reviewers for making such a non-sense statement; because after all, reviews are nothing but the opinion of an individual and opinion can be anything.

Storyline: In the film, K (John Abraham) was a businessman who had a habit of smoking and he was very proud of it. He was of bossy nature and he didn’t want anyone to take over his decision. Film really started when his wife Anjali (Ayesha Takia) threatened him to leave him forever for not quitting smoking. He went to Guru Ghantal Baba Bengali Sialdah Wale (Paresh Rawal) for a rehabilitation program. Guruji forced him to sign the contract for the program after which he could do anything but smoking. If he does then his family would pay the price. From this point, the film adds many layers to the story by revealing the bizarre secrets and makes K confused between reality and dreams until the climax.

Story: With respect to Hindi film standard, I can understand that the story was much more complex than a usual tale. Even after the last scene, for the next 20-30 minutes, you will try to decipher the metaphoric scenes like Ram-Shyam-Balram (people with same faces), live telecast of K’s life on TV, Bathtub in a dream sequence, one rupee debt etc. I was really amazed to see the linear narration style of the most illustrated topic ‘Smoking’. This might be made as another documentary but added plot of rehabilitation center with some of the extraordinary incidents brightened the concept and lifted the story to the whole new level.

Acting: I am not a big fan of John’s Acting but this role suited his personality (Charming, well built and rich guy) and he delivered it with brilliance. Paresh Rawal is one of the finest actors in this industry. He was in an avatar of Guruji which he embodied with his excellent body language, smooth dialogue delivery and majestic screen presence. Ayesha Takia played as K’s wife/secretary and she picked it up so easy. Ranvir Shorey is one of the most underrated actors. From this movie, he showed how much potential he has.

Directing: Everyone started to agree to the fact that Anurag Kashyap has a potential to become the greatest director after watching Dev-D, Gulal and Gangs of Wasseypur. But for me, he gave this glimpse from ‘No Smoking’ which came way early in 2007. He picked a very crucial topic of smoking, wrote it with interesting perspectives and directed in his unique style. If you could find first 15 minutes interesting then I bet you won’t leave your seat until the end. The movie never loses its pace and the music & cinematography provide an extra wing to it. None of the shots are a waste to watch.

Final Words: If you are a smoker and want to quit, watch this movie! I say this again that from the name it may sound as a documentary but it’s not; actually you are in for a thrilling show!

Some of the reviews which might be helpful:
http://filmigirl.blogspot.in/2009/09/no-smoking-underrated-gem.html
http://asuph.wordpress.com/2007/11/26/no-smoking-review-and-more/

4 thoughts on “Movie Review: No Smoking!”